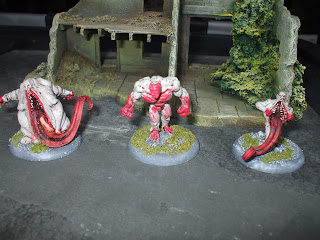 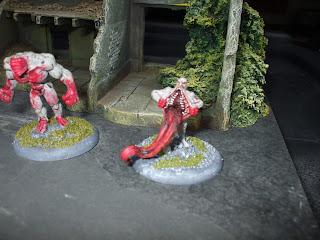 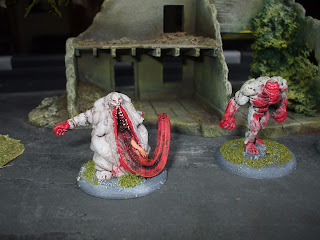 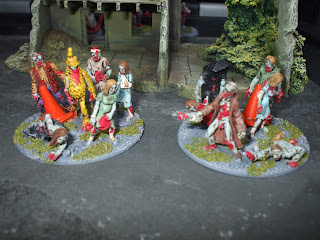 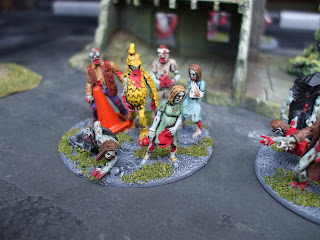 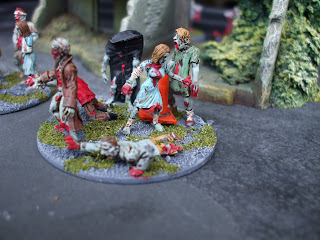 Some recently finished Tank and Horde bases for my zombie game,I am using AKULA's rules AR:SE which are all on two sides of an A4 piece of paper and fun and can be found on his blog which is listed on this page.My painting is in the style of I possibly could do better but I want to get them on the table or just finished before I might go off them.
The tank figures are from Helldorado(far left and right) and the middle figure is from Four A Miniatures who do some nice figures,the horde bases are all studio miniatures which are amazing figures,now the horde bases from other people can be a lot bigger and a lot more figures(just see AKULA's blog but I could not justify the cost and time and so went with this option.Hope you like them and any questions feel free to ask.
Posted by The Angry Lurker at 17:22 2 comments: 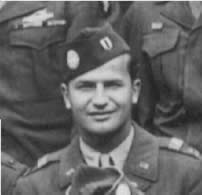 After Winters the most amazing character and person in the company,and this scene makes the hairs on the back of my neck stand up.I have looked for a book on him after reading Winter's biography "Biggest Brother" but as of yet  have found nothing sustansial except for little pieces here and there and this wikipedia bit on him.

Email ThisBlogThis!Share to TwitterShare to FacebookShare to Pinterest
Labels: Speirs

Our club met up on Saturday for a game but numbers were limited as only 4 people were available but we had a hundred years war scenario set up based on WAB with armies of chivalry thrown in house rules.Postie is the ringmaster and myself and smithy ended up as the french and richard the guy in the picture was the english and the speaker of the title phrase when he was double moving his heavy cavalry into a better position(does not matter how old you are but it brings out the giggles among friends especially when he responded to our heckling with the phrase "well enough to please").
The game was started with 3000pts each and deploying your units on a pre drawn map before the game and when we deployed the english had 5 units of longbowmen in the front ranks and our 1 unit of shortbows and crossbowmen went bye bye and the game went downhill quickly for me and smithy but it was enjoyable and it was a game. which we do not get to do as often as we once did or would like.
But the game finished earlier than normal and we spoke about my blog and Ray's blog another member of the club (Don't throw a 1) and writing about games and showing pictures but we decided then we need a name for the club and a debate has now begun on what we should be called(there were some of the usual less than nice comments,true but not nice) and we are thinking of the"The Devil's Reject's","The Old Dogs of War" or the " The Motley Crew".I have included some pictures taken by Postie but they are not great so he will be taken off camera duties in future,hope you enjoy. 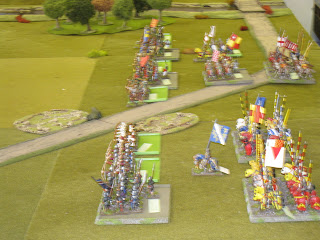 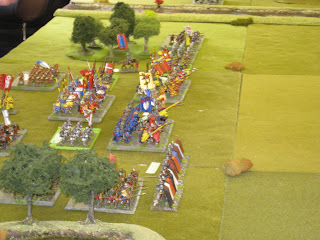 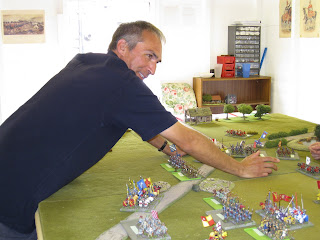 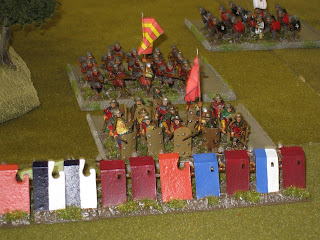 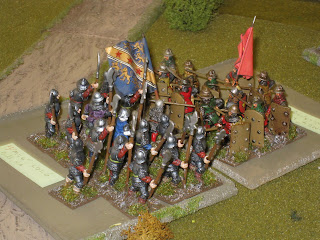 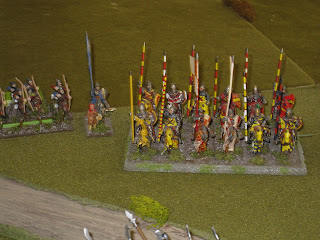 Reminds me of home


Great scene from a good movie but really great music by the Dubliners.
Posted by The Angry Lurker at 23:40 1 comment: 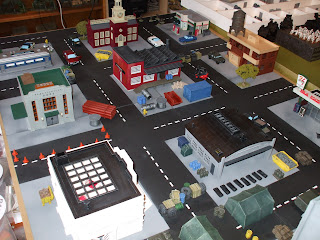 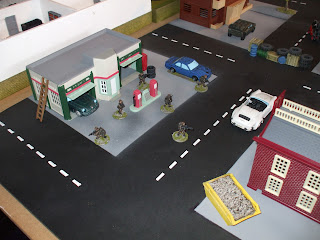 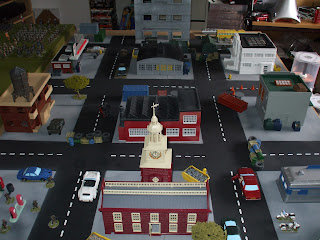 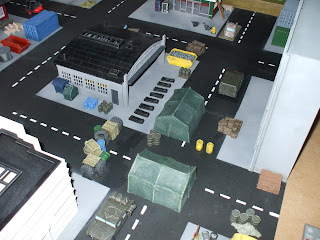 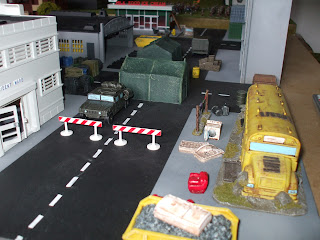 Currently working on my zombie town or resident small american town for zombie games using the AR:SE rules from Akula(his blog address can be found on this page)and use it for Red Dawn scenarios,future wars or apocalypse scenarios.The majority of the building are plastic from the O scale Plasticville range, O scale K-Line range and one scratchbuilt by a friend(the 3 storey grey building).
The scenery bits and pieces have come from a multitude of sellers and if you spot something and want to know where it came from just leave a comment and I will do my best to help you.I intend to place scenery in all the buildings time and finances allowing and have started on the bank with some counters and safety deposit boxes from Copplestone Castings only to discover that is the only building where the roof does not come off but thats life for now,I will take more pictures with more figures on the board apart from the marine recon team you can see entering town near the garage wondering where everybody is?
Posted by The Angry Lurker at 11:43 11 comments:

Email ThisBlogThis!Share to TwitterShare to FacebookShare to Pinterest
Labels: zombie

Got some 28mm Pig Iron Miniatures vehicles as a gift from a friend who actually asks what you want and got 2 MBTs and an APC but they only sent 1 of each but more about that later.The figures in front of the APC are from left to right Copplestone and Empress Miniatures and in front of the MBT are Hasslefree,Heresy and Pig Iron.

The resin is heavy and solid and little to no cleaning on them except for some on the metal parts but all in all I would heartily recommend them and this brings me onto the other issue as I have placed 4 orders with Pig Iron to date and the first issue was not having figures in stock when I ordered and paid for them but received and email and eventually got them with another order,the next order a figure was missing from a pack and a pack of heads was missing but this was sorted and with the next order the vehicles I ordered 3 but received 2 and have been told I have to wait for the missing one to come back from the casters,during this time they have communicated all the details and little problems but when do you say enough is enough.
For me that stage has not been reached but it could come even for companies who have some excellent product like Pig Iron.One last point on this particular rant is when companies go on holiday could they put it on their site so you do not think they have forgotten you.Pig Iron Miniatures,beautiful stuff but with little problems.
Posted by The Angry Lurker at 12:33 No comments:

Apologies but should have some pics up this weekend and a review of some Pig Iron Miniatures armour,chaos at work with a TUPE takeover of the site by G4S and payday changes imminent and with at least 90% of normal people who live from wage to wage this could be a financial disaster but we try to muddle on and spare a thought for my other half who has had to put a horse down due to a gobshite who fed her something she could not digest and it got lodged behind her heart.
Posted by The Angry Lurker at 15:36 No comments: 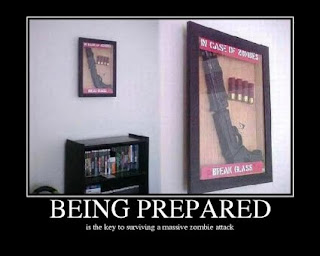 For when they rise.
Posted by The Angry Lurker at 13:05 No comments: 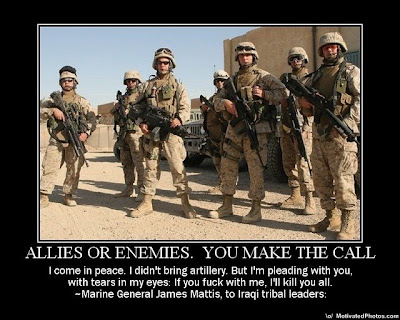 Gotta love the US Marine Corp.
Posted by The Angry Lurker at 12:58 1 comment:

Email ThisBlogThis!Share to TwitterShare to FacebookShare to Pinterest
Labels: picture

Poor weekend this weekend as I meant to take some pictures of my 28mm zombie/apocalypse/etc.... town and underground facility,both these are nearly finished but will probably remain as WIP until doomsday or the real zombies arrive.I will get a loan of a camera this week off a friend and will have some pictures hopefully by the end of the week other than that my weekend was wasted playing online MW2 on the PS3 so I hope to be more productive this week by painting at the moment 28mm tables and chairs from Pardulon,bank counters and safety deposit boxes from Copplestone Castings and test tubes and autopsy table from Black Cat Bases.
Posted by The Angry Lurker at 11:21 No comments: